Nora no longer recognised the housing estate that had been her home for over fifty years. The tidy gardens were now littered with an assortment of rubbish from empty drink cans and broken bottles to other unsavoury things she didn’t dare think about. Most of the surrounding houses were derelict and an attempt had been made at boarding them up. The barriers the council put up to keep the human scavengers out never lasted long. She shivered as she recalled the nights spent listening to the groans of the boards as they were wrenched from their housings. The wood was used to feed the huge oil barrels that blazed each night throughout the estate. 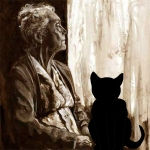 “Time to go out,” she picked up her cat, which was dozing on a chair and carried her in to the kitchen.

All Hallow’s Eve dawned dry and cold. Perfect weather for the children to do their trick or treating, Nora thought, as she placed the cat on the ground. It looked at her in disgust before turning its tail up and walking away. She smiled at its antics and watched as it made its way to the bottom of the garden. The trees in the little wood outside the wall looked sombre. It was no longer a playground for children, but a dark, sinister place. She ran her hands down the sleeves of her faded cardigan, trying to brush away the cold. The wood was deserted now, but she saw them at night; the dark shapes scurrying through the trees. The glass shards she cemented in to the wall, in the hope of keeping them out, glistened under the watery sunlight, but they did little to add to her sense of security. The little timber gate in the centre of the wall was kicked down countless times and her hands were too old and bent from arthritis to repair it. She walked back inside and turned the key in the lock. It was wishful thinking that the frail door would keep anyone out. Shrugging on her black coat, she tied a scarf under her chain and picked up her old wicker basket.

“Come on, old fellow,” she called to her dog, Seth. “Time to go shopping.”

He looked up at her bleary-eyed and groaned. Like his mistress he did not relish the daily trek to the shops. She warned him to keep his temper in check as the last time he showed his objection to the way the street vermin treated his mistress it had resulted in a visit from the police, with a warning to keep the dog in check or else. He knew she depended on him for company and he could do nothing more than walk by her side and behave in much the same way as the stupid cat. It made him feel worthless, but if he kept his mistress happy then so be it.

“Come along,” she held the door open for him. “You’ll have no dinner otherwise.”

Leaning heavily on her walking stick she started down the path. She didn’t really need the stick, but it would serve as a weapon if need be. It was still too early for the druggies and the dealers. All would be sleeping off the effects of last night. Nora nodded to one or two of the old neighbours, but kept her head down for the most part. It was best not to make eye contact with anyone and as the pavement was cracked it meant she could choose her footing with care. Seth growled, as a mongrel crept out from one of the abandoned houses, but the animal was too ill and staved to offer any threat. There were many such animals roaming the estate; dozens of feral dogs and cats abandoned in much the same way as the houses.

The only shop still open in the area was kitted out like a prison. Stout bars lined the windows and razor wire ran the length of the roof. Nora ordered the few items she needed and packed them in to her basket.

“I see the eye is healing up nicely,” Joe, the shopkeeper remarked on the cut above her eye.

A stone, thrown by one of the yobs had met it marks and the cut required four stitches.

“It’s a bloody disgrace that decent people can’t go about their business in peace.”

Now that he was off on his usual tirade there was nothing for her to do but nod and agree.

Everyone had an idea of what should be done to better the estate, but no one was acting on it. After saying her goodbyes, she began the short walk home. Seth walked before her, sniffing the ground, searching for new scents. The skeleton of a burnt out car sat on one of the green areas and it became a playground of sorts for some of the children. They were three of them sitting in its ravaged innards now, so Nora crossed the road rather than pass them. They knew she was easy game and would lose no time in picking on her. Things could have been so different, Nora thought if her daughter had lived and her husband hadn’t run off, but that was long ago; too many decades for wishful thinking. She tried to banish such thought from her mind as the loneliness threatened to overwhelm her.

“Look at the witch.”

She picked up her pace and tried to ignore the taunting voice.

“Hey, witch,” the boy ran in front of her and was soon joined by his other two companions.

He was no more than ten or eleven years old and should be in school. Nora knew enough to keep such things to herself and she kept walking.

They fell about laughing at this and Nora felt her heart race as they stood in a line blocking her way.

“Let me pass, please,” she hugged her basket closer.

“Let me pass,” the mimicked her soft tone.

Seth bared his teeth and his growls of warning rumbled like thunder in the silence.

“You better watch it,” one of the boys said. “My dad will have that mutt put down if it touches me.”

“Seth will not touch you if you let us pass.”

They eyed the dog warily and moved apart just enough to let her pass. One of them jostled her as she squeezed through and she lost her footing and fell against some railing. She managed to grab one of the rusted bars so she didn’t hit the ground, but she banged her side. Her basket fell from her hands and the contents went spilling out on to the dirty ground. The boys laughed as she staggered to her feet and one of them scooped up the packet of biscuits she’d bought as a rare treat and the bag of sweets for the few children who would call that night. Saliva dripped from Seth’s mouth as he gnashed his teeth and made small lunges at her attackers.

“Don’t,” Nora whispered and the dog drew back.

Tired with their game, the boys started to walk away.

“Thanks for the goodies, witch,” one called over his shoulder.

Nora concentrated on picking up the rest of her shopping. Her side ached and she could feel the bruise begging to form in her skin.

“Come on, Seth,” she was glad of the solidness of the walking stick as her knees shook from fright.

The boys had returned to the burnt out car and their laughter followed her all the way home. It took her a while to get the key in the lock of the front door as her trembling fingers refused to stay still. Placing her basket inside the door, she turned back and looked back to where the boys were sitting. Seth followed her gaze and looked up at her in question.

“Do you know what tonight is boy?” She looked down in to his big eyes. “It’s All Hallow’s. Do you remember, Seth?”

The gleam within his eyes flared until they burned like fire. Of course he remembered, but that was long ago and something his mistress ordered he forget.

“That’s right, boy. Tonight belongs to us and it’s time we showed those who torment us the full meaning of Halloween.”

Her cat, which was lurking in the bushes, ran forward and rubbed against her legs; purring her pleasure at her mistress’s words, because black cats remember too.